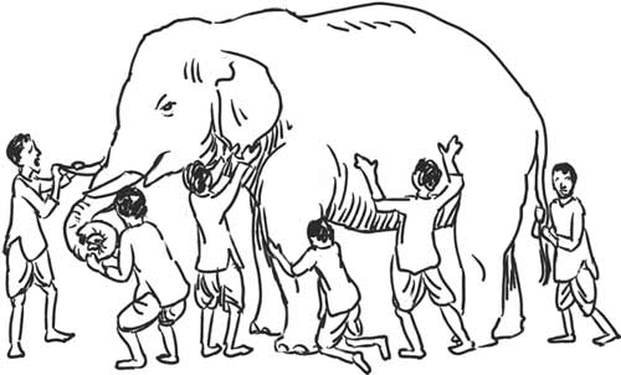 It is difficult to make predictions, especially about the future of businesses.  But it is even harder to make macro economic forecasts.  Imagine having to synthesize countless variables, and projecting an outcome based on that set of conclusions.  Most of us get a few pieces of our macro thinking right, but the reality is that most of these forecasts are utterly wrong.  It has little to do with the intelligence, or the ability of the forecaster, may be more to do with the lack of maturation in Macroeconomics as a science.  This poem reminds me to receive all macro forecasts with a great deal of skepticism, no matter how convincing they sound.  I have adopted the "Micro is what I do, and Macro is what I put up with" mantra from Charlie Munger.  Hope you take macro forecasts with a grain of salt also, and I hope you enjoy the poem by John Godfrey Saxe.

It was six men of Hindustan,
To learning much inclined,
Who went to see the Elephant
(Though all of them were blind),
That each by observation
Might satisfy his mind.

The First approached the Elephant,
And happening to fall
Against his broad and sturdy side,
At once began to bawl:
"God bless me! but the Elephant
Is very like a wall!"

The Second, feeling of the tusk,
Cried, -"Ho! what have we here
So very round and smooth and sharp?
To me 't is mighty clear,
This wonder of an Elephant
Is very like a spear!"

The Third approached the animal,
And happening to take
The squirming trunk within his hands,
Thus boldly up and spake:
"I see," quoth he, "the Elephant
Is very like a snake!"

The Fourth reached out an eager hand,
And felt about the knee:
"What most this wondrous beast is like
Is mighty plain," -quoth he,-
"'Tis clear enough the Elephant
Is very like a tree!"

The Fifth, who chanced to touch the ear,
Said- "E'en the blindest man
Can tell what this resembles most;
Deny the fact who can,
This marvel of an Elephant
Is very like a fan!"

The Sixth no sooner had begun
About the beast to grope,
Then, seizing on the swinging tail
That fell within his scope,
"I see," -quoth he,- "the Elephant
Is very like a rope!"

And so these men of Hindustan
Disputed loud and long,
Each in his own opinion
Exceeding stiff and strong,
Though each was partly in the right,
And all were in the wrong!